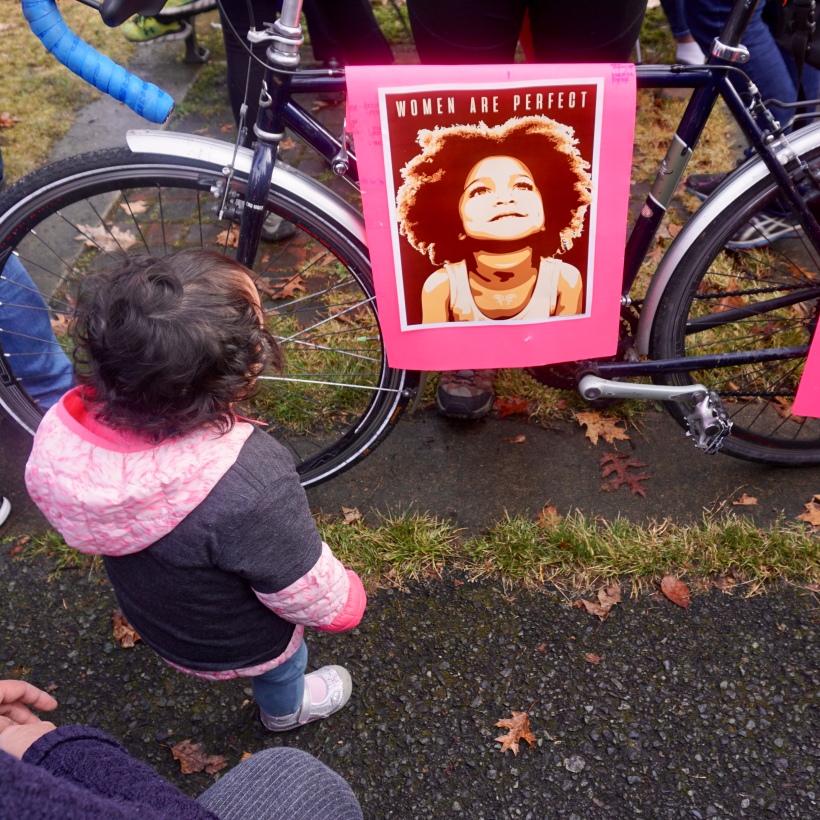 To My Fierce Little Lady,

We marched in the Seattle Womxn’s March today as a family.  We joined over 120,000 people, many carrying creative signs and wearing handmade pink pussy hats.  In Washington, D.C. over 500,000 people marched, and many, many more marched in cities around the country.  (Your aunt said that the march she attended in Detroit was a spiritual experience.)

These are trying times that challenge even the most hopeful spirit.  On Friday Donald Trump became the president of our country.  He has consistently used his financial and political power to bully people and the press and, I fear, now, other countries, failing to take responsibility for the harm he creates.  He has been publicly racist, sexist, bigoted, and hate-filled.  He plans to fill his administration with self-interested, wealthy business leaders who in some cases do not believe in the protections the agencies they have been nominated to run are meant to enforce.  The spate of Senate confirmation hearings last week heightened my fear that we may be facing attempts to completely dismantle government services we take for granted, like a public school system.

Trump has a Republican House and Senate and a vacancy to fill on the Supreme Court, which would in many cases provide a fifth and deciding conservative vote.  (And let us not forget that this was President Obama’s to fill when Justice Scalia died in February of 2016.)  Because of this consolidation of power, Trump is certain to undo years of progress in civil rights, climate change, education, healthcare, immigration, reproductive justice, campaign finance, and more.  He threatens to undo the fundamental pillars of our democracy.  He has shown consistent disregard for rule of law, and enters his presidency in direct violation of the US Constitution’s prohibition against presidential conflicts of interest due to his massive and intricate business dealings he will not give up in a manner that resolves those conflicts.  He has aligned himself with foreign leaders who employ abusive tactics to maintain power.  And he lies openly, compulsively.

It was important to me to share today’s historical march with you because I want you to understand that even in the face of all of this, you have a voice and your voice matters.  Your brown skin and female body and multiracial and multiethnic background mean that you will experience sexism and racism and at times you will feel defeated.  In those moments I want to remind you of this one.  Today young people like you, of all colors and creeds, joined their moms and grandmas and great grandmas to send a message to the world and the new administration.  Today we showed with our collective power our resolve to be heard.   We told the new president and his supporters that we will challenge policies and practices that harm those already at society’s margins.  We said that in the face of pervasive incitement of fear, we are not afraid.